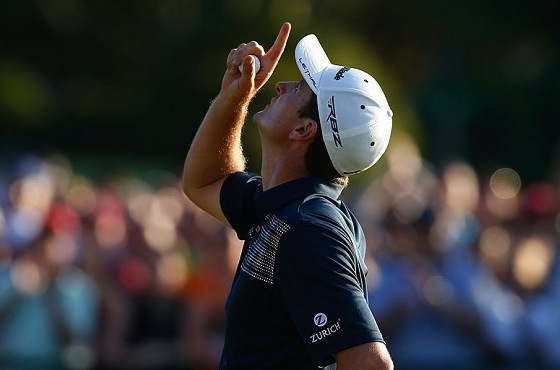 Justin Rose said his US Open victory was "all my childhood dreams come true".

Rose, age 32, won by two shots to become the first Englishman to win the event for 43 years and first to claim a major since Nick Faldo at the 1996 Masters.

After tapping in for par on the last hole, he raised his finger to the sky in tribute to his father Ken, who died from leukaemia in 2002.

"I felt like it was a fitting moment and something I needed to do to say thanks to him," Rose told BBC Sport.

Rose secured the major at Merion on Father's Day and said he wanted to honour his dad, who was an enormous influence on his career.

"My coach Sean Foley sent me a text this morning which said: 'Go out there and be the man your dad taught you to be and that your kids can look up to.'

"You saw me look to the heavens with it being Father's Day - I was just trying to remember my dad."

He added: "I've been thinking of my dad for the last couple of days and it wasn't lost in me the fact that this was Father's Day.

Rose also acknowledged it was a relief to win his first major tournament, saying:

"Most resumes are empty or definitely missing something unless you have a major championship, no matter how good a player you are.

"It's kind of nice to have got that off my chest relatively early because only in the last year or two I've been talked about as one of the players who should or could win majors.

"You certainly don't want the title of best player never to win a major.

"I've felt I've been getting closer to that tag and now I've knocked it off fairly early, which is good.

"Going forward it gives me a lot of confidence. I don't know if it takes pressure off, but it's a moment where you can look back and think childhood dreams have come true."

Fellow Englishman Luke Donald, whose own title hopes diminished courtesy of a final-round 75, was full of admiration for playing partner Rose.

"For the last few years he has been known as one of the best ball-strikers in the game," said Donald, who is still looking for his maiden major title.

"He showed that. To win a US Open, you have to have ultimate control of your golf ball. He did that. He hit some really clutch iron shots down the stretch.''

Tiger Woods, dressed in his usual final round red Nike golf shirt said he struggled with the pace of the Merion greens all week.

"Putts were breaking a lot more," said the 37-year-old, who finished tied for 32nd. "I gave it a little more break and then it would hang. That's kind of the way it was this week."

Woods last won a major tournament in 2008 by claiming the US Open at Torrey Pines.