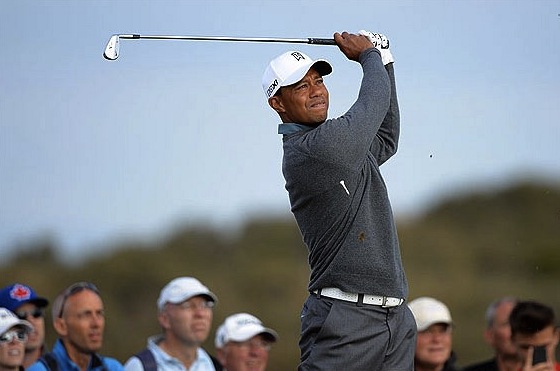 Not for the first time at Muirfield, officials at the course delayed Tiger Woods’ Open Championship preparations.

Woods, who has made early practice rounds a habit at major championships, was stopped in his tracks by marshalls when he attempted to begin his Monday round at 6.40am when play was forbidden until 7am.

The incident had echoes of a run-in with stewards the last time the Open was at Muirfield, in 2002, when Woods initially denied entrance to the course after security did not instantly him.

On Monday Woods took the request of the marshalls gracefully and returned to the putting green for some extra practice before teeing off shortly after 7am alongside his Nike golf teammate Rory McIlroy.

"The practice tee opens at 7am and that was communicated to the players," a tournament spokesman said.

"This is to help spectators see as much play as possible and to give the greenkeepers sufficient time to prepare the course to the highest standard each morning."

Woods, who was accompanied through his round by girlfriend Lindsey Vonn and coach Sean Foley, later had chats with Johnnie Cole-Hamilton, Royal & Ancient's executive director, and Peter Dawson, the R&A's chief executive, to ensure there were no grievances.

Back in 2002, Woods dressed in his usual smart golf clothing - did not have his credentials on him – and was initially refused entry to Muirfield by a staff member who did not recognise him.

"She was following the rules and she was doing her job," Woods said at the time. "I didn't have my credential and I left it in the car. "I guess I convinced her by saying I won the tournament two years ago."