Oakley endorsed Mcllroy, 23, was due to face American Bradley at 11:25 local time but reached the Medina Country Club car park in an unmarked police car at 11:15.

European captain Jose Maria Olazabal said: "I didn't have this in mind."

The rest of his European team mates, dressed in navy golf clothing, had spent at least an hour at the course preparing for their matches, but Mcllroy's late arrival meant he was only able to hurriedly eat an energy bar and take a few practice swings to loosen up before he having to dash to the first tee.

McIlroy explained: "I was just casually strolling out of my hotel room when I got a phone call saying you have 25 minutes. I have never been so worried driving to the course. "Luckily there was a State Trooper outside who gave me the escort. If not I would not have made it on time.

"I had read my tee time on my phone, but it was just one of those things. I got here in the front of a police car, at least it wasn't in the back!"

The Northern Irishman's first shot landed off the fairway at the foot of the spectators, but he recovered nicely to tie the opening hole.

Mcllroy then took the lead following a birdie on the fourth hole and continued to stay ahead against Bradley, who had won all three points at Medina in his debut Ryder Cup.

"I'm happy to get a point to help the team," Mcllroy said. "When I saw the match-up I liked it, I liked playing one of their strongest players." 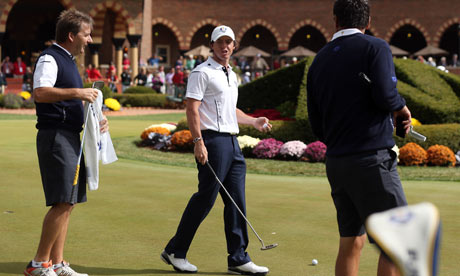