A Day With Sergio Garcia At Wentworth Golf Club To celebrate Sergio Garcia's 20 year relationship with adidas Golf we were very kindly invited to the prestigious Wentworth Golf Club, to look back over his successful career and chat casually to him as he prepares for the 148th Open at Royal Portrush.

At just 39 years of age, Sergio Garcia has had a career stooped in success, but he made his big entrance into the limelight when he went toe to toe with Tiger Woods in the PGA Championship at Medinah in 1999. 20 years on, Sergio has amassed numerous tour wins, became Masters Champion in 2017, but also became the most successful Ryder Cup player of all time after Europe won last time in Paris. He has been a phenomenal adidas brand ambassador and adidas thought it was only fitting to celebrate with various golfing press at the golf club in Virginia Water. Luckily we were invited to tag along. 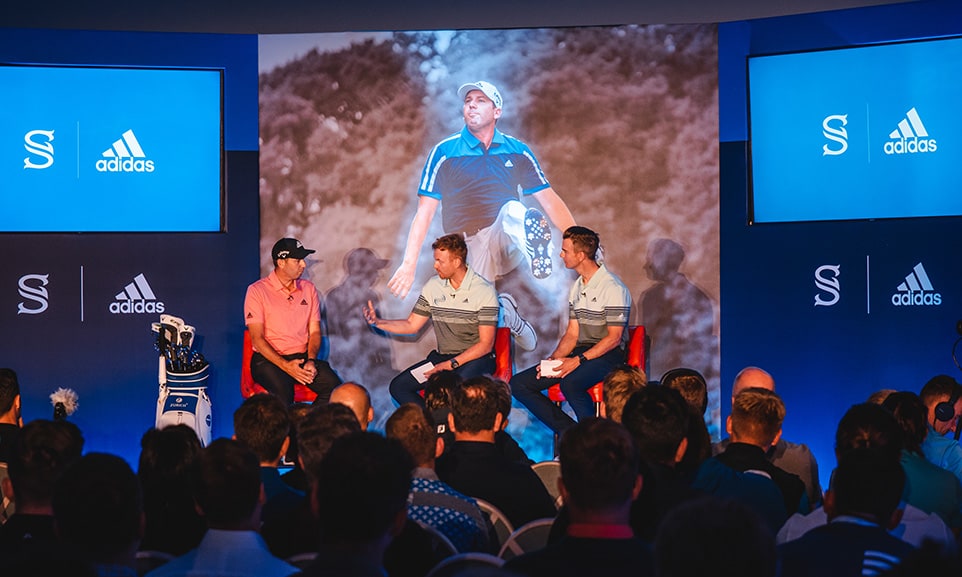 The day started with a Q&A hosted by the guys from Me and My Golf, where Sergio reminisced about that round at Medinah, that special shot from behind the tree, talked about sports friends and European team mates both past and present, his family, but also The Open and how special the event is to him.

Then it was out on to the first tee, where Sergio gave interviews with a select few. You can find interviews from Me and My Golf and Golf Magic online, but in our 10 minute slot we wanted to ask Sergio some questions that were a bit more relaxed, so we sat at the side of the first tee and let him enjoy a cheese & ham toastie, a spanish lunchtime classic. We also had some questions from our social media followers. 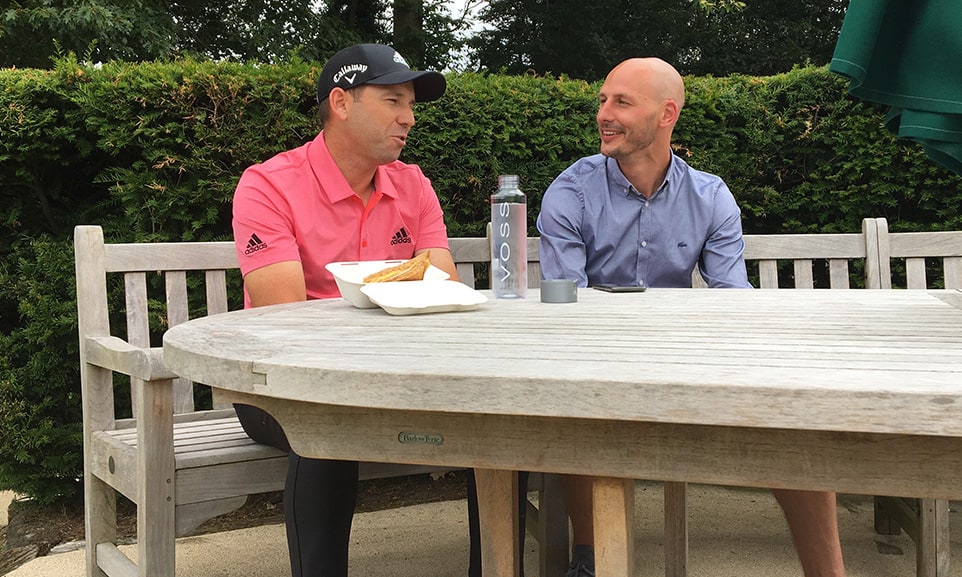 F18 - Outside of golf, who are the sports stars that you have the most respect for and why?

Sergio - I'm a huge sports fan but I was always a big fan of Michael Jordan, I think he was unbelievable. The guy had at all.

Then in tennis, Roger and Rafa, Rafa is obviously Spanish and this means I support him a little more, but the way that Federer plays and the way he conducts himself is amazing. I admire them both a lot.

F18 - Are the guys with the mental strength the ones that you respect the most?

Sergio - Yeah I think Roger and Rafa are both mentally strong but different, so impressive. Roger is very good because he's got so much belief in himself. I think Rafa is just such a fighter, he always believe that he can do it, no matter what, even if he's hurt he still pushes as hard as he can.

F18 - A slight change of direction now, how long can you keep a football up for? What's your record?

Sergio - I haven't really gone for a record, but I can keep it up for a good amount of time. I still play football a little bit, not with my team anymore but every once in a while I have a kick about with friends.

F18 - With your friend Gareth Bale's contract at Real Madrid being up in the air, what are the chances of him playing for your team CF Borriol?

Sergio - Ha ha, none! We would have to sell the whole village to get Gareth.

F18 - Who was your favourite football star when you were growing up?

Sergio - I've always been a big Real Madrid fan and so Raúl González Blanco was really good to watch, I was a big fan of his. Also Iker Casillas, he's my age and we kinda grew up together. I started watching football when I was 9 or 10 years old and Brazilian Ronaldo was awesome to watch, he was a big star to me.

F18 - Who introduced you to the game of golf?

Sergio - I loved it from the beginning but my dad really got me into it. My dad was a Professional and he still plays a little bit on the seniors circuit, he was more of a teaching pro back then but he loves it and he's always encouraged it in me.

F18 - Was a career in football an option?

Sergio - Not really, I got into golf so early and because I was never in a proper team at football, golf took priority. I couldn't do both.

Sergio - A little bit here and there. It's interesting how it goes down, I give him some shots and we always try to make it a good battle.

F18 - What is the biggest bet you've ever played golf for?

Sergio - Gambling when playing hasn't really ever been a thing for me. We play for maybe $100 or something like that. I'm not a big gambler.

F18 - Who do you think are golf's rising stars?

Sergio - I think in America there are 2 or 3 that look good. Matt Wolff who won recently at the 3M Open is a good looking player. Then in Europe we have a couple of good looking Spanish guys coming through, so look out!

F18 - Just to wrap up, I've been wearing adidas golf clothing for over 20 years also, as my dad ran a golf pro shop. So I wanted to ask if you've ever worn anything as bad as these adidas Cruiser golf shoes that I wore when I was 8 years old? 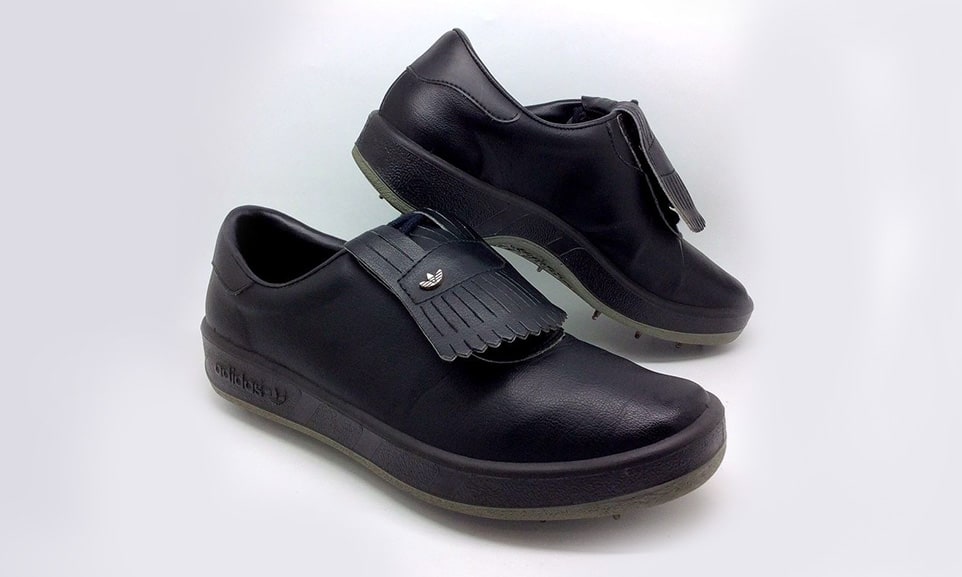 Sergio - No, definitely nothing that bad. adidas have been kind to me over the years!

F18 - Sergio, thank you very much for you time and best of luck at Royal Portrush, all of us die-hard adidas fans will be rooting for you.

Then, fully refreshed after his smash and grab lunch, Sergio hit the course for a 3 hole clinic, in which he faced a few challenges from Pro golfers and vloggers. It was great to get a glimpse of how Sergio thinks and plays his way around the course and it's obstacles and he seemed in good form ahead of Royal Portrush. 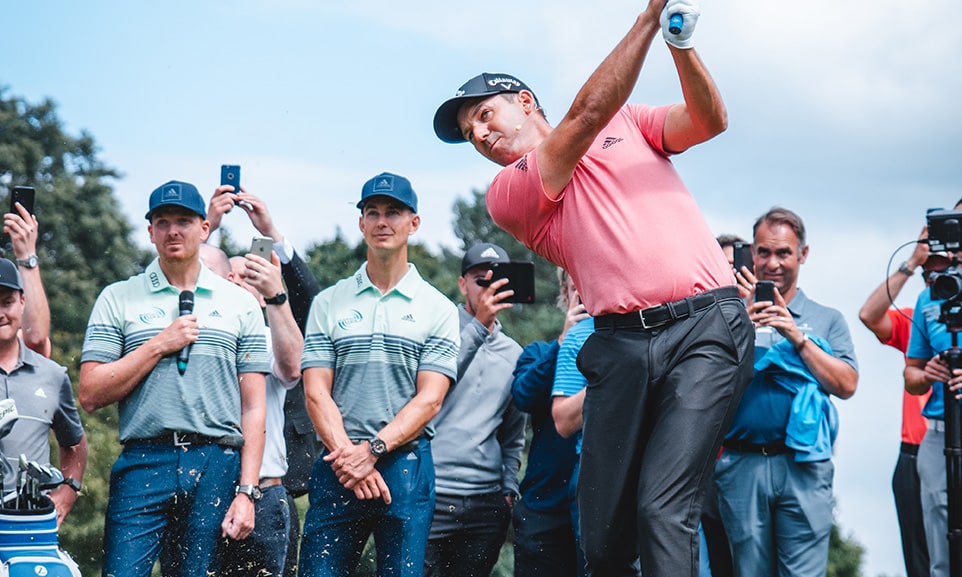 As the afternoon drew to a close we were lucky to get Sergio to sign a few adidas products, that we will be giving away in competitions over the coming weeks. So please follow us on Instagram to be kept in the loop.

Just to sum up the day, within minutes of Sergio appearing at Wentworth it was obvious that he is an all-round nice guy and it was a pleasure to meet and speak with him. We give special thanks to Sergio and adidas for their tremendous hospitality throughout the day and wish Sergio all the best as he goes into the 2nd round of The Open on -3, chasing down JB Holmes' lead. 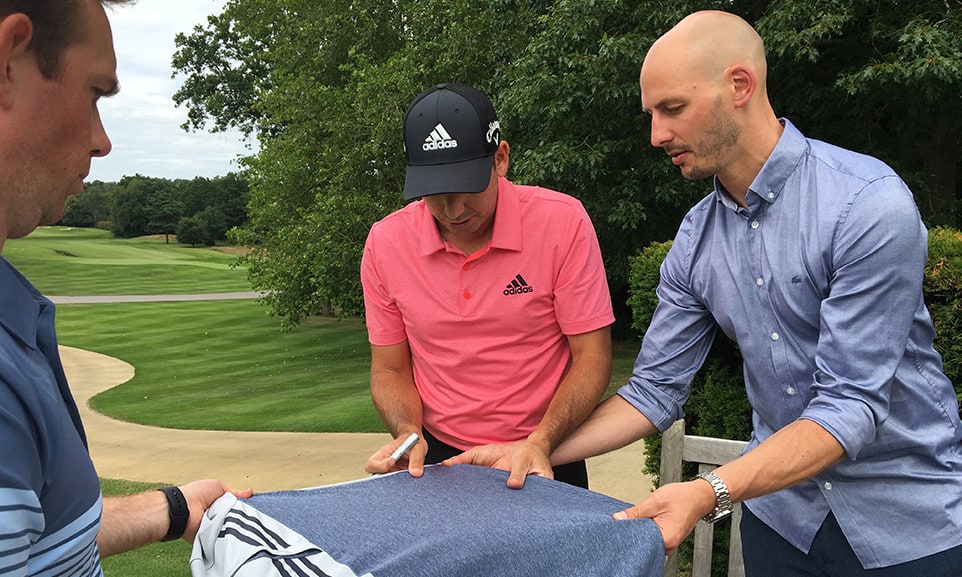