The History of Lyle & Scott... 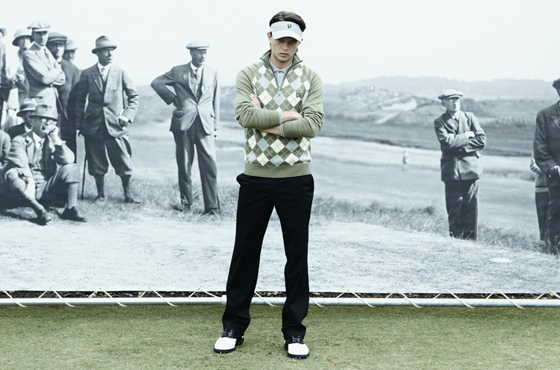 Lyle & Scott Golf is one of the most recognised and prestigious brands in the golfing world, with an impeccable pedigree and 140 years of trading history. Here at Function18, Lyle & Scott is one of our top selling brands – therefore to celebrate the new 2014 AW collection, we’re taking a look back at this brands rich history!

With an £800 loan, the original cashmere clothing company was founded in 1874 in the Scottish Borders town of Hawick. By 1954, it was sufficiently established and recognised to be asked to design a cashmere clothing collection with renowned designer, Christian Dior.

Its famous eagle motif was created four years later in 1960 and just two years later the company was further recognised with a visit from the Queen to its premises in Hawick. The two founders, Lyle and Scott, had their first experience of a Golf Open in 1968 and were sufficiently inspired to create a new golf clothing range.

The company was so known for its quality and workmanship that it received the Royal Warrant by appointment from HRH The Duke of Edinburgh in 1975, and from this point, Lyle & Scott's position within the golfing world was guaranteed.

After clothing the Ryder Cup Team in 1980, the famous eagle brand was then sported by a range of Open winners, including Greg Norman and Ian Baker-Finch. The brand's association with the golfing world's most prominent players was further strengthened through its sponsorship of top player, Lee Westwood, and by stars such as Sean Connery publicly sporting the golf clothing line. This decade also saw the introduction of some of the brighter colours and shades still popular today, particularly in the ranges of golfing sweaters and polo shirts.

Lyle & Scott underwent a brand refresh in 2001 with a vintage line being launched two years later, and a flagship retail outlet opening in Convent Garden in 2004. Since then, the brand's clothing has been sported by stars of stage and screen, also winning the Drapers Young Fashion brand in 2009. Particularly favoured on the indie music scene, the famous eagle was seen on bands such as Vampire Weekend, Bloc Party and the Arctic Monkeys.

The latest collection for Lyle and Scott autumn winter 2014 mixes the best of trend-led high fashion and classic quality, with technical fabrics, soft cashmere and perfect tailoring. The emphasis on quality, craftsmanship and expertise still remains at the heart of the Lyle & Scott Company today, and it continues to go from strength to strength, appealing to a broad market of golfers, fashion fans and style-lovers alike.