Mercedes-Benz get creative with the ultimate golf cart! 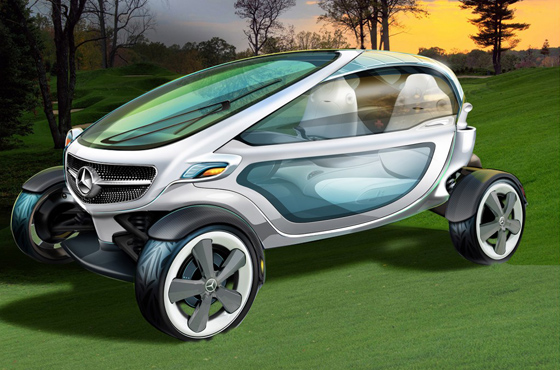 Mercedes-Benz revealed a concept that they claim to be the “ultimate golf cart” at the Open Championship at the Muirfield last week.

The cart was created at Mercedes-Benz’s forward-thinking design studio in California using ideas submitted by golf fans in a competition held by the German car maker. The stylish two seater adopts a number of design cues from current Mercedes-Benz models combined with a slick profile to give it a highly contemporary look that instantly makes traditional golf carts appear old fashioned.

The Mercedes-Benz Vision Golf Car is driven by a plug-in electric energy system; its lithium-ion battery is topped up by a solar panel incorporated into the heavily curved roof structure. The traditional steering wheel sits alongside a joy stick mounted on a extensive centre console that runs through the middle of the cabin, allowing either occupant to perform the driving duties.

It doesn’t stop there! The centre console also encompasses a multimedia panel with a docking station for an iPad or iPhone, together with Bluetooth and USB interfaces. Other luxuries include, a head-up display unit, loudspeakers, air-conditioning, infotainment centre and a communication system conceived to connect the new golf cart with the clubhouse and other golf carts.

A head-up display unit offers a number of additional functions, including a course layout, current scoring status and weather information modes. There’s even a 'fore' button to warn other players of a wayward shot!

The bad news is it doesn’t clean your golf shoes at the end of the round and unfortunately you can’t buy one from Function18 or anywhere for that matter!