The history of Galvin Green... 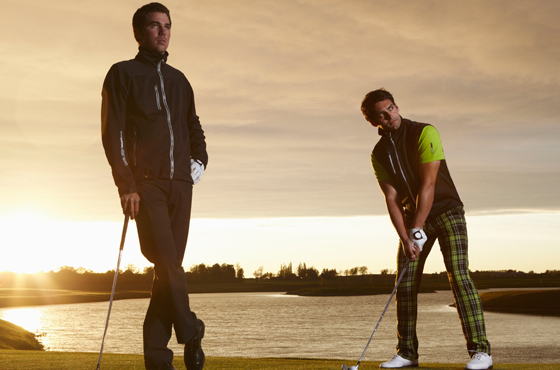 Nowadays, Galvin Green is one of the most established names in golf apparel both in the UK and Worldwide.

The company was founded in Vaxjo, Sweden by Tomas Nilsson in 1990 and in the early days traded exclusively in Sweden, before expanding its operation across Scandinavia and elsewhere.

Originally Galvin Green was, and indeed still is, characterised by brightly coloured, highly detailed waterproof golf clothing designed to make life easier on the green. As Mats Lundqvist, lead designer at Galvin Green, put it, ‘If you’re comfortable on the golf course, you'll be able to swing better and play better golf’.

Their clear philosophy seems to be working because, from inauspicious beginnings, the company now dominates the market for golf waterproofs in Britain and Ireland and entered the market in the United States for the first time in 2013. Indeed, the company has been hailed as one of the success stories of the latest decade. However, designer Lundqvist concedes that while the company has produced some designs that would raise an eyebrow among more ‘conservative’ golfers in recent years, one or two of them were just too ‘funky’ to make it beyond the prototype stage.

The company is renowned for the technicality of its garments, in terms of breathability, comfort and so on, which is due in part to a close association with fabric manufacturers. In most cases, new garments will be tested for at least two years for performance and quality before they actually appear on the market. The testing process may include field-testing by members of staff or contracted players on the professional tour. Nevertheless, garments such as those made from specially designed Gore-Tex fabrics can still be machine-washed and tumbled-dried on a regular basis.

All together the Galvin Green collection for 2014 offers nearly 300 garments, including golf jackets, trousers, knitwear, shirts and many others, all designed for golfers by golfers. There’s also an exclusive collection, featuring five luxury garments, designed to coincide with the 2014 Ryder Cup, which takes place on the PGA Centenary Course at the Gleneagles Hotel, Perthshire, Scotland in September. In March 2014, as part of its ‘Gear Up’ campaign, the company released a free app to provide golfers with the background to its latest offerings and to showcase key performance features.

Would you recommend Galvin Green products? Do you prefer Galvin Green over any other golf brands? Share your thoughts and reviews below….