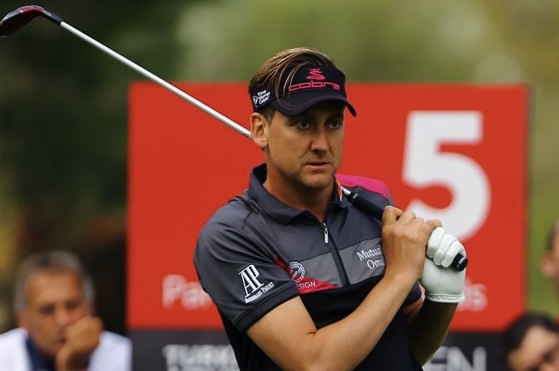 It’s safe to say Ian Poulter is one serious character. Whether it be ranting on Twitter to his 2 million plus followers or showing pure passion on the golf course, the PGA Tour superstar and founder of IJP Design golf clothing is certainly not short of charisma.

His latest soirée started a couple of weeks ago when he and Henrik Stenson made a $100 bet about who would take top spot in the Race to Dubai. Stenson had a big lead but Poulter was confident he could give his European pal a run for his money and began to close hard.

To make things a little more interesting, a few days before the DP World Tour Championship, Stenson decided to up the ante and give Poulter 10-1 odds on the challenge.

The prize? In typical Ian Poulter style, he suggested the loser would have to play waiter to the winner for a night out.

"I like to make these silly things, and he said he'd like to take the bet on," said Poulter. "I also said that if I do manage to pass you, we will have a nice night out, and he will have to pour my drinks for the evening. I think $1,000 isn't an issue to him but pouring my drinks all night might be a big problem."

Stenson, who's been fighting an injured right wrist, agreed to the wager.

"If he catches me, I can only pour them with my left, so he's going to have to hold the glass himself,” Stenson said.

Of course Stenson came out on top by seven strokes on Sunday, on a day when Poulter literally waved a white towel on the 18th green as Stenson finished ready to take the $100 and night of Poulter in a waiter's suit is all his.

"I would expect him to be rather relieved to be honest, because I've thrown a lot at him in the last four weeks, I've given him so much stick and so have you guys, which is brilliant. So I'm sure he's a relieved man. He's had an incredible back end of the year, and you know, best player on the planet right now."

Stenson kept the banter going by mentioning that he hadn’t forgotten about the bet.

"Yeah, I've still to collect that hundred dollar bill, ain't I. I'm going to get a photographer with me when we do that. Yeah, I'm not going to be serving him drinks. He can feel free to serve me one."

Great fun and something we can all relate to when taking the money from our fellow golfing mates at the weekend!