To nobody's surprise Ian Poulter has been handed a wild card by captain Jose Maria Olazabal following the Johnnie Walker Championship at Gleneagles, but, Irishman Padraig Harrington, a member of the last six sides, was left out.Harrington has won only two of his last 13 cup games whilst Poulter has won seven of his last eight. Olazabal has made a wise decision by rewarding the two players who came closest to making the team on points.

IJP Design founder Poulter finished 11th on the table and Colsaerts 12th. Harrington was down in 19th place.

Until Spaniard Sergio Garcia won in America last Monday Poulter was in position to qualify and Colsaerts, winner of the Volvo World Match Play title in Spain in May, would have made it with a closing 66 in the Johnnie Walker Championship yesterday. The 29-year-old from Brussels, who only three years ago stood 1,305th in the world, a final round shot 72, but Olazabal had seen enough to warrant his place in the team.

For the match at Medinah in Chicago on September 28-30 Europe will start with eight of the side that won by a single point at Celtic Manor two years ago – Poulter, Rory McIlroy, Luke Donald, Lee Westwood, match-winner Graeme McDowell, Francesco Molinari, Peter Hanson and Martin Kaymer.

Adidas golf clothing endorsers Justin Rose and Garcia are back after failing to keep their places last time and 43-year-old Paul Lawrie earns his second cap a remarkable 13 years after his first.

It was thought at one point that Olazabal was going to become the first captain on either side to lead out a team without a single debutant in it since the very first contest in 1927. 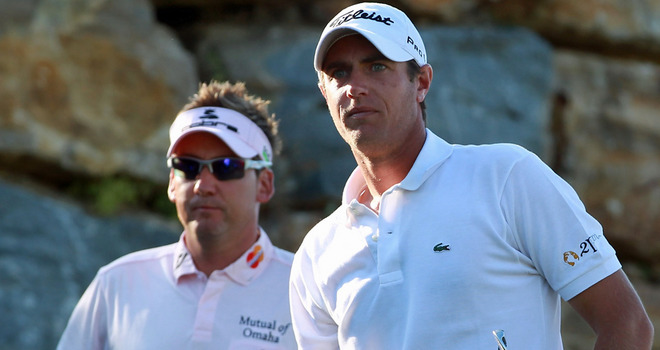