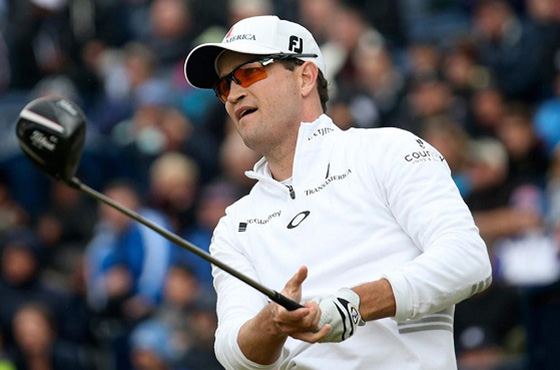 Zach Johnson has revealed the three key factors behind his recent victory at the Open: his wife, his faith and his Oakley golf sunglasses.

Johnson wore his Oakley shades throughout the tournament, regardless of what the weather was doing, in order to boost his visual acuity. It's a boost you too can experience by browsing through the Oakley golf sunglasses range here at Function 18.

Johnson sank a succession of sizzling putts, including a 25-yard birdie at the 18th to make him the clubhouse leader, as he came almost out of nowhere to power his way to his stunning win.

After taking up golf at the age of ten, Johnson played all the way through school and university before turning professional in 1998. Rising steadily through the ranks, he achieved a breakthrough success by winning the 2007 Masters Tournament in Augusta, beating Retief Goosen, Rory Sabbatini and Tiger Woods in the process. He was the first player ranked outside of the world top 50 to ever win the Masters.

In the years that followed, Johnson played solidly and bagged a further nine wins on the PGA tour, but failed to carry off any major championships. He began wearing Oakley golf sunglasses at the start of 2013, and in September of that same year he won the BMW Championship, earning his biggest purse to date - until it was eclipsed by his July 2015 win at the Open. According to Yahoo! Sports, 39-year-old Johnson’s career earnings now top $39 million, putting him seventh on the money list.

In a recent interview, Johnson explained why he finds Oakley golf sunglasses so useful. “It’s certainly not to make myself more interesting! I’m hardly a poster boy. I wear them at dusk and dawn. I see greens better and I see the reads of putts better.”

He particularly favours the Oakley Half Jacket 2.0 XL Sunglasses. In the week before the Open, he posted a photograph on his Twitter account of his two sons, both sporting hand-me-downs of his previous shades of choice, along with the caption: “My two boys rockin' their new @oakley Flak 2.0s! #insideORoutside I'm starting them young.”

Lenses for All Light Conditions

The Half Jacket 2.0 XL Oakley golf sunglasses feature a frame that is light and comfortable enough to wear all day. Interchangeable lenses allow you to adjust your vision according to the conditions, while the cleverly designed Three-Point Fit system keeps your sunglasses in place even when you’re perspiring.

You'll find a choice of Half Jacket 2.0 XL frames here at Function 18, along with a full range of Oakley golf clothing and accessories. Also the popular Prizm Golf lens, which uses Oakley's latest technology to enhance colours in the parts of the spectrum where the eye is most sensitive to detail. By doing so, Prizm lenses make it easier to judge depth, distance and the condition of the golf course.

On cloudy days you can switch to an alternative lens suitable for the conditions, such as Persimmon. These reduce the amount of blue light getting through to your eyes, raising the level of contrast in what you see and giving your depth perception a boost. Oakley golf sunglasses will also reduce eye fatigue, allowing you to play better for longer.

Whichever Oakley frames and lenses you choose, you’ll soon see why Zach Johnson speaks so highly of the brand. Treat your eyes to a new level of clarity.