Nobody likes a 10 on their card.....especially at the Masters! 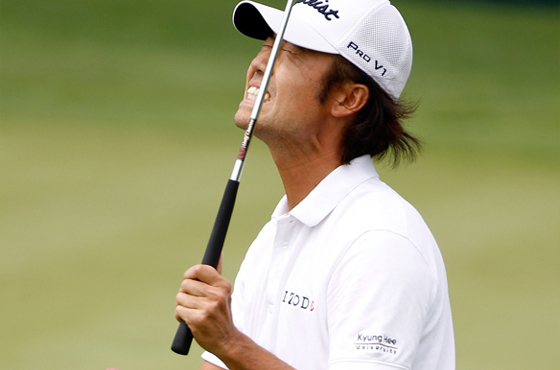 Hitting double digits on a par-3 hole is certainly not any fun, but Bubba Watson could see the comical side of it after a 10 at the Masters.

The defending Masters champion was never really in with a shout of winning the 2013 title on Sunday as he found himself nine shots behind the leaders at the start of the final day at Augusta.

However, one hardly expects to make the headlines when you are not in contention for the title, but that is exactly what Watson and Kevin Na accomplished on the final day.

They both carded an embarrassing 10 on the par-3 12th hole in Amen Corner by finding the water several times.

The American was at one under when he started the 12th hole, but things went dreadfully wrong after that.

"So we tied, so we were even after that hole," Watson said jokingly after his round. "You know, it's funny, if you're not going to win, you've got to get in the record books somehow, so I'm a guy that got a double digit score on a par-3.

Watson's defence of his Masters title never really got off the ground as he kicked off his opening round with a 75 on Thursday and finally finished seven over.

However, when you take into account on the 10 shots at the par-3 12th on Sunday, his final score wasn’t not too bad.

"Oh, it's really easy, because no matter what, you're playing the following year. So when you look at it, it was a blast. Like I said, though, my mindset was I'm not defending champion, my mindset is I'm trying to win a golf tournament," Watson said.

"My golf proved that I didn't win it. So it was fun, it was a blast. Obviously when you come back here, like the other question was, you're always the defending champion, you're always a Masters champion, so no matter what, it's going to be a blast every year I show up here."

29-year-old Na, dressed head to toe in white golf clothing, finished with an 81 on Sunday. He found the water with three shots as he tried to go for a bit extra.

I mean it happens," Na said. "I went for the flag obviously you're not supposed to but I'm back of the field, trying to make a birdie, maybe a one. I hit a bad shot and I wanted to try it again and hit another bad one.

"Sadly, I hit three bad swings in a row, actually four, the last one was no good too, but it is what it is. Trying to pull off a shot that is maybe a little low percentage, but I had nothing to lose."