Oakley sponsored Rory McIlroy won his second major with a brilliant eight-shot victory in the US PGA Championship at Kiawah Island.

The 23 year old Northern Irishman hit a six-under 66 to finish 13 under and return to world number one, while unheralded Englishman David Lynn (68) was second.

Founder of IJP Design Ian Poulter faltered on the back nine to finish third on four under with Justin Rose, defending champion Keegan Bradley and Sweden's Carl Pettersson.

Nike’s Tiger Woods stuttered to a level-par 72 and two-under total.

By contrast, McIlroy conquered the Ocean Course, even posting a second-round 75 when many of his peers were bullied by Kiawah Island at its wildest.

He became the youngest winner of the tournament since it adopted strokeplay in 1958, while his eight-shot victory was also a new PGA Championship record, beating the previous largest winning margin set by Jack Nicklaus 32 years ago.

"I don't think I have let it sink in yet - I am speechless," said McIlroy, the first Briton to take the US PGA title since Jim Barnes won the first two tournaments in 1916 and 1919 when it was a matchplay event.

McIlroy is also the youngest player to win two majors since Spanish legend Seve Ballesteros achieved the feat in 1980.

"It was a great round of golf," he added. "The gameplan was just to play solid. I got off to a bit of a shaky start, but settled into it and I thought my putting today was phenomenal.

"Thanks dad and thanks mum - I'm sure she's watching at home. I had a good feeling at the start, but I never imagined doing this.

"It means an awful lot to look at the names on that trophy and put mine alongside them."

McIlroy's final day began earlier than expected as a result of Saturday's rain which brought a halt to several third rounds.

Having drained five birdies on the front nine the previous day, the man from Holywood added two more on the 15th and 16th to start the final round on seven under, a three-shot lead over second-placed Pettersson.

Mcilroys biggest challenge came from England's Ian Poulter. The golf fashion trend setter, who was outside the automatic Ryder Cup places going into the tournament, remarkably holed five successive birdies and six in the first seven holes to close the gap to McIlroy to two.

However, Poulter's charge was halted on the back nine by three consecutive bogeys from the 13th which effectively ended his major bid for another year.

Finally, McIlroy, who won the 2011 US Open by seven shots, knocked in a 25-foot putt on the 18th to seal victory with a sixth birdie of the round. 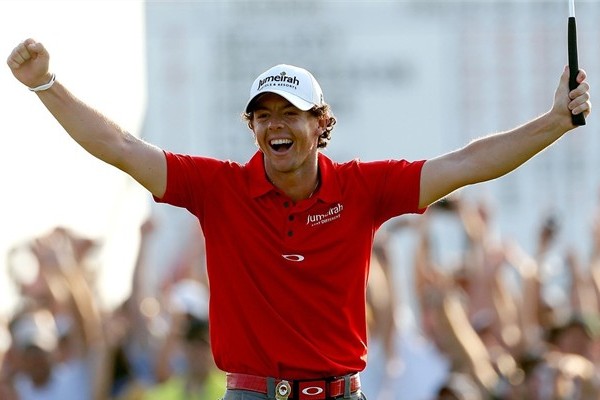