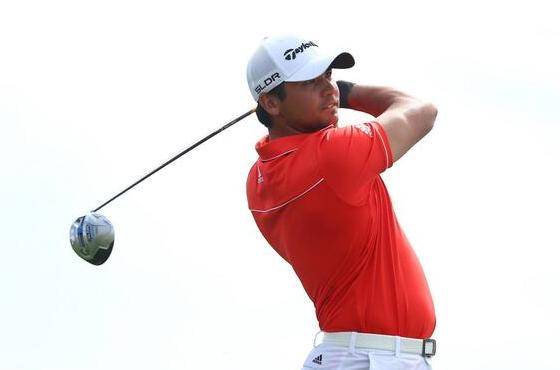 The Australian looked in complete control throughout the early stages of the match and was two up with two to play, before missing a 20-foot putt for the title on the 17th hole.

That gave Frenchman Dubuisson the chance to take the match down the 18th and he did so with a superb birdie, before scrambling for a par on the last as Day left his attempt short having run a long birdie putt some 10 feet past the cup.

The real excitement began, however, on the first play-off hole.

Dubuisson's approach sailed long and into the desert, leaving what appeared an impossible chip shot. The French star had other ideas, though, and managed a astonishing bump and run to five feet which was enough to secure a par to prolong the match.

The players were then led to the ninth, where again Dubuisson hit a poor approach shot and found desert. But yet again, despite his ball being hidden under a branch, the 23-year-old produced one of the most incredible up-and-downs in the history of televised golf as a bewildered Day looked on.

Neither player could achieve a par on 10 with both missing mid-range putts, while Dubuisson missed a 25-foot putt for the title on the 14th, their 22nd.

However, with light fading quickly Day secured an excellent birdie on the short 15th and when Dubuisson's putt missed, the Australian was at last able to celebrate a first World Golf Championship title.

Get the Jason Day look at Function18.