Two major tournament wins and a world No 1 ranking make Rory McIIroy a perfect partner for Nike to work with in creating the new Lunar Control 3 golf shoe.

Taking feedback and inspiration from McIIroy, and adding elements from the successful Lunar Control 2 worn throughout his 2014 victories, Nike golf and McIlroy have worked closely to produce the ultimate lightweight yet stable golf shoe! 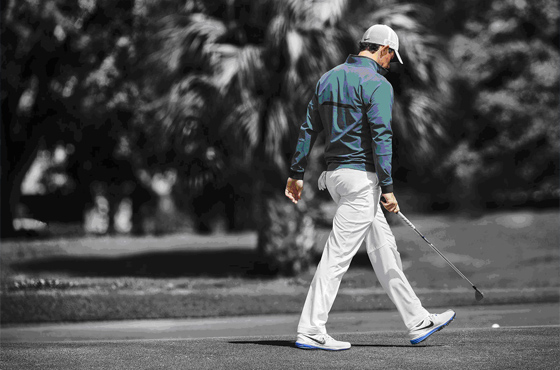 With increased control and stability gained by adding an additional spike at the outsole and advanced traction elements at the edges, McIIroy’s aggressive swing is no longer compromised by the fear of slipping. This enables him to maintain power and speed throughout rotation, giving him one of the most powerful swings known throughout the golfing world.

A wider base also allows the golfer to feel closer to the ground for as long as possible throughout impact. Simultaneously, the Nike Flywire technology secures the foot and works in conjunction with the added traction to increase and improve the athlete’s control. Nike’s improved Flywire technology also means the cables are more robust and has added lateral support to the foot.

Not only does the Lunar Control 3 out-perform its predecessors in terms of technical features, but the design also gets the nod of approval from Rory for its sleek appearance. Made from a microfibre synthetic material, the shoe is both water resistant and more durable than the previous version. Furthermore, the shoe ensures a comfortable fit from the outset with a softer and lighter lunarlon foam responsive cushioning within the midsole.

Nike’s irrepressible focus on improving everything to ensure that athletes perform at their very best has ultimately paid off, with McIIroy and other golf athlete’s trialling the new Lunar Control 3 at the Dubai DP World Tour Championships.

After only a limited number of the White/Volt colourway were released online at the end of November, the Lunar 3 Control will be available from 1st January 2015 also in Black/Pure Platinum, Pre Platinum/Bright Crimson, and White/Pure Platinum.