Spaniard, Garcia won the Wyndham Championship in North Carolina by two shots after the tournament spilled into a Monday finish because of heavy weekend rain. He resumed play one in front with 14 holes to complete, but stood on the 13th tee sharing the lead with American Chad Campbell and South African Tim Clark. Then a burst of birdies came from four of the next five holes with a closing bogey on the last to secure the 32-year-old his eighth PGA Tour victory, but first since the 2008 Players Championship.

Poulter had moved into the 10th and last automatic qualifying spot with his joint third place finish at the USPGA Championship, but looks a certainty for one of captain Jose Maria Olazabal's two Wildcard picks.

Garcia began his birdie spree with a superb 136-yard approach to within 18 inches of the flag on the 13th, got up and down from sand at the long 15th, hit his tee shot to two feet on the 166-yard next and then fired in another iron to six feet at the 17th. His drive into the trees on the 18th left him work to do but the damage was limited to a bogey  resulting in an 18 under par total of 262.

'I am proud of the way I played coming in,' Garcia said.

Adidas golf clothing ambassador Garcia, who failed to make the 2010 side and acted as one of Colin Montgomerie's assistants, added: 'Obviously I won a couple of times last year in Europe, but it's been a while here (in the United States) and it feels great.

'I hit some really good shots and made some nice four or five-footers when I had to. I'm very happy about the way the week has gone.' 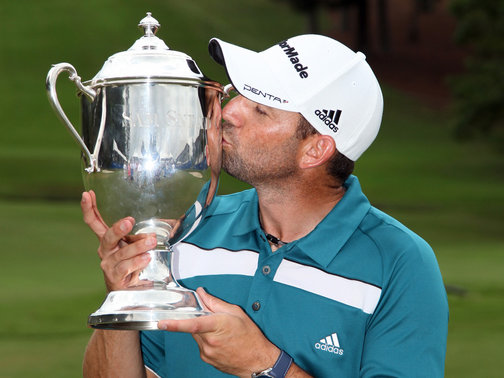