Swedish Ryder Cup star Peter Hanson overcame concerns about the health of his young son, sleepless nights and a strong European field to win his fifth Tour title at the KLM Open in Holland on Sunday (9 September).

A monster 30 ft (9.1m) eagle putt on the last hole gave him a two-shot victory with an aggregate total of 266 (14 under par) as he played the final round reassured that one-year-old Tim was recovering from a virus that saw him admitted to a Florida hospital on Friday.

“I did have to dig deep at times, especially on Saturday after getting little sleep on Friday, but this win is a massive boost for me ahead of the Ryder Cup,” he said.

Going into the final round four places back, Peter wore his black & chilli red Murdoch Ventil8™ shirt in warm conditions at the Hilversumsche course to score consistently until a wayward drive on the 16th required a ruling from an official to take a drop on a track. He then played a tremendous recovery shot between the trees to par the hole and to overhaul his nearest challengers on the last.

Hanson became the first Sweed to win a tour title this season.  He is also the third Team Galvin Green player to win on the European Tour this season, following the debut victory of Thorbjørn Olesen in Sicily and Jamie Donaldson at the Irish Open.

The result boosted him into the world’s top 25 at 23rd spot and into 12th place in the Race to Dubai. The first prize also took his earnings in prize money above those of his best ever year with more than €1.6m (€1.5m in 2011).

“To win under such personal pressure and against a strong line up was another major achievement for Peter following his outstanding showing at The Masters,” said Christian Nilsson, CEO of Galvin Green. “He is a great ambassador for the brand and we wish him well at Medinah as a member of Europe’s Ryder Cup team later this month.” 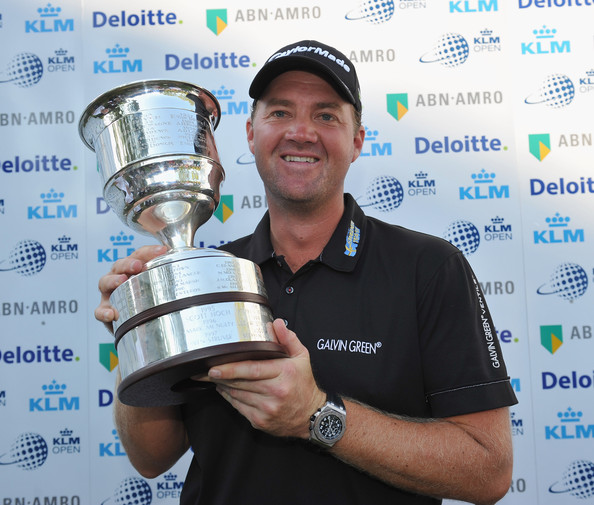