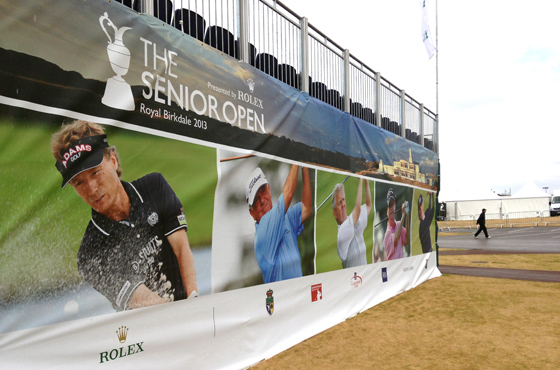 We were intrigued to see the quality of the ball striking and of course what golf clothing was on show. Both left us without disappointment!

As we headed to the practice range we were greeted by what could only be described as golfing legends. Fred Couples drew the crowds as he smashed ball after ball down the range in usual relaxed manner. We couldn't help but notice his pristine pair of white Ecco Street shoes. To his right, more big names from the past; Mark O'Meara, Larry Mize, Tom Kite and 1996 Open Champion Tom Lehman. The shear quality and accuracy of every strike on that range gave us the impression that we were in for some excitement out on the course!

Out on the course we followed the likes of Tom Watson, Corey Pavin and Scotsman Colin Montgomerie who had a bit of a "Monty style" sulk as he reportly stormed off the course following a one over par 71.

As the afternoon progressed, bad weather moved in you could say there has never been a major finish like it. Or, rather, a failure to finish. With light fading fast, Bernhard Langer dressed in an illuminous orange golf shirt and Mark Wiebe, who had shot rounds of 70 and 66 respectively, headed for the 18th tee to begin a sudden-death play-off to decide the winner of the 2013 Senior Open Championship.

After two playoff holes it was now 9:45pm, leading to play being suspended due to poor light conditions.

The two players would return at 8am the following morning to decide the winner. After going down the 18th hole for the fifth time, it would be Wiebe who came out on top following a missed putt from Langer to save his par and continue the playoff further.

Wiebe commented "I'm a little tired, I'll tell you that! I try to play the playoffs like I was playing the tournament. I just got a few extra holes in. .... I have never been in a playoff in a major championship either so I was a first-timer. I just tried to play the golf course as good as I could."

"I was surprised that Bernie missed his putt [on the third playoff hole] because he's a great putter, he's a great player........It just was my time."