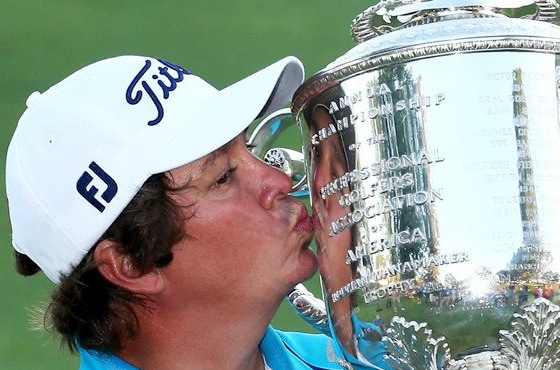 Jason Dufner held his nerve to seal his maiden major title with victory at the US PGA Championship at Oak Hill.

The 36-year-old American surpassed countryman Jim Furyk with a final-round 68 to win by two shots at 10 under.

Furyk, 43, led overnight but 71 meant he would miss out on adding another major title to his trophy cabinet.

Hugo Boss ambassador Henrik Stenson was third on seven under, alongside fellow Swede Jonas Blixt six under. Nike’s Rory McIlroy ended three under after a 70, with Lee Westwood posting a disappointing three over after a 76.

Dufner, a two-time PGA Tour winner, came closest to a major title when he threw away a five-shot lead with four to play as he lost to Tommy Hilfer’s Keegan Bradley in a play-off for the 2011 US PGA title.

He was not to make the same mistake at Oak Hill on Sunday. He rarely hit a bad shot, resulting in a major title in upstate New York.

Dufner showed he had the qualities to take the title, notably matching the lowest score in major history with a 63 on Friday. He trailed Furyk by one going into the final round, but was sharing the lead by the forth hole following a birdie which resulted in a two shot gap by the 9th hole.

A missed birdie putt on the 10th, followed by almost missing the next putt coming back, were fundamentally the only outward signs of nerves - until both players bogeyed the 17th and 18th - as Dufner preserved his distance on Furyk all the way to the giant Wanamaker trophy.

"I can't believe this is happening to me," said Dufner, who is the 18th different winner in the last 20 majors. "To come back from a couple of years ago in this championship when I lost to Keegan in the play-off, to win feels really, really good. The last two holes were a little unfortunate. I wish I could've closed out with no bogeys but I am happy to get the job done. It's a big step for my career."

Furyk, who last picked up one of his 16 titles in 2010, said: "I needed to keep the pedal down and make pars there and keep the pressure on him and I just didn't do it.

Stenson and Blixt attempted to become the first Swedish man to win a major title, but both made a handful of mistakes to card rounds of level-par 70.

Stylish Stenson, who plunged from the world's top 10 to as low as 230th in early 2012 claimed his third straight top-three finish after coming second in the Open and third behind Tiger Woods at Firestone.

Nike’s Tiger Woods could only finish tied for 40th at four over par after carding rounds of 71,70, 73, 70 – just a week after shooting 61 on his way to winning the WGC-Invitational for his fifth title of the year.

The world number one has now gone 18 majors and five years without a major title and will have to wait until the 2014 Masters at Augusta to try to restart his quest for a 15th Grand Slam victory.

"I've been there in half of them so that's about right. If you are going to be in there three-quarters or half of them with a chance to win on the back nine, you have just got to get it done," said Woods.

"I was right there and certainly had a chance to win the Masters and the British this year. The other two, I just didn't hit it good enough. Just the way it goes."