Nike’s Tiger Woods turned his thoughts to trying to win a fifth Masters title after claiming his first PGA Tour title since September 2009 at Bay Hill.

The former world number one headed towards the first major of the year with a five-shot victory over Graeme McDowell at the Arnold Palmer Invitational.

"It's always fun to play there and I'm looking forward to going to Augusta with the momentum I've built here."

Woods, who moved up to sixth in the world rankings with the win, retired injured at his last event two weeks ago with an Achilles tendon strain that initially seemed likely to threaten his participation at Augusta.

Chasing a seventh Bay Hill title, and 98th professional victory, Woods held a one-shot overnight lead over Northern Ireland's McDowell. He carded a steady two-under 70 on the final-day to wrap up the win.

Starting the day on 11 under, the American dropped a shot at the second hole, but made up for it with consecutive birdies on the next two holes.

In contrast, world number 13 McDowell, who came from four back to beat Woods at the 2010 Chevron World Challenge, dropped two strokes six at the second before the unexpected bonus of a 45-footer from the fringe of the third to get back to nine under.

McDowell then holed a 50 foot monster at the long sixth to reduce the lead to two. But, by the turn, Woods had increased the gap with a birdie the difficult eighth after a brilliant approach over the water to two feet and McDowell missed a four-foot par putt at the next.

The 2010 US Open champion reduced the deficit to three with another long putt on the 11th but took six on the 12th and though Woods bogeyed the short 14th, so did McDowell, and the gap remained four when Woods rescued a par with a 12-foot putt on the next.

It stayed that way until the short 17th when McDowell mistakenly overshot the green and made bogey as he closed with a two-over-par 74.

"I never got close," admitted McDowell. "He really nailed home his comeback. Great to have a front-row seat watching maybe the greatest of all time doing what he does best - winning golf tournaments."

IJP Designs Ian Poulter, who has recovered from a recent bout of pneumonia, was third, his best finish of the year but South African Ernie Els shot a 75 to miss out on Augusta.

The “Big Easy” needed to finish outright third or better to qualify for the Masters by climbing back into the world's top 50.

Woods had gone over two years without a win anywhere following revelations about his private life before capturing the Chevron World Challenge in December 2011."Winning again is down to a lot of hard work but it was great to have so much support out there," he added. 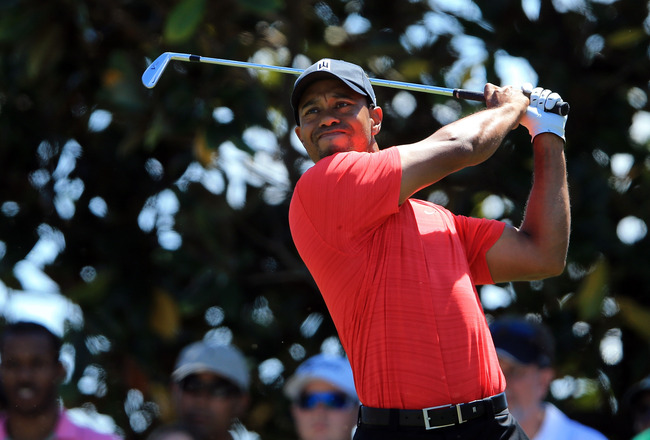