14 year old Andy Zhang tees up at US Open

Andy Zhang - the 14-year-old is set to become the youngest golfer to play the US Open since World War II - will be one of the big talking points at the tournament begins.

The Chinese-born Florida-based golf superstar may be half the age of many of his rivals on the professional circuit - but he is already 6ft tall, with a swing speed of 115mph and is used to a competitive environment.

Andy Zhang comes from Shandong province in China and spent the bulk of his childhood in Beijing, reportedly picking up golf clubs for the first time at the age of six and by the age of seven was being coached.

His mother, Hui Li, was quick to recognise his talent and brought him to the US to participate in a handful of tournaments when he was 10. He is currently a student at the Leadbetter Academy in Florida.

Several senior players he considers to be heroes have praised his abilities, including Rory McIlroy, Aaron Baddeley, Tom Watson and Tiger Woods - who reportedly sought him out in the locker room.

Although he has legitimately won the right to compete through qualifying - and because of an injury to Paul Casey - the BBC's golf correspondent Iain Carter says that his inclusion brings golf into one of sport's biggest ethical debates.

The question as to how healthy it is for children to be competing in the adult world is being raised more and more.

It is a debate in which Nike Golf sponsored Tiger Woods has come down firmly on the young golfer's side.

"It's not too young if you can do it. That's the great thing about this game, it's not handed to you. You have to go out and put up the numbers and he did," he said.

"He shot the scores he needed to qualify and move on and he did and he's here playing on the biggest stage. Just think about the experience he's going to gain playing in this event. How well that's going to serve him playing junior events and high school events."

Andy Zhang is a year younger than Japanese American golfer Tadd Fujikawa was when he competed in 2006.

Andy Zhang will be the second youngest player in major history. He will be 14 years and six months on Thursday in comparison to Tom Morris who reportedly first played in the Open Championship at 14 years and four months in 1865. 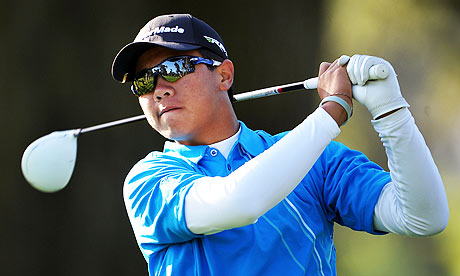